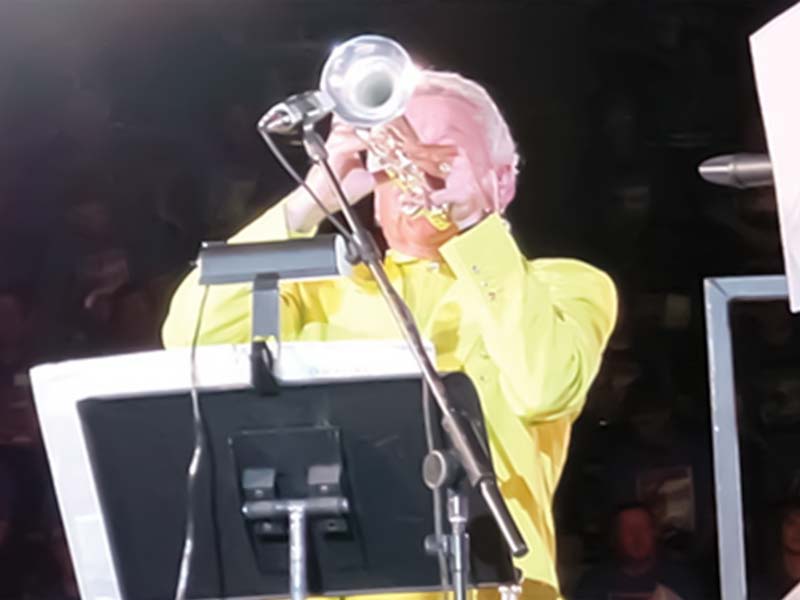 Doc has done it again! The night of 1000 trumpets was held at Southern Mississippi University on October 9th 2001. The challenge was to assemble 1000 trumpeters in one arena for a spectacular performance that involved all. This idea was turned into an event complete with masterclasses and exhibitors along with a performance by the Southern Mississippi University Symphony Orchestra. Doc Severinsen was not only the featured artist at this great event but was the master of the ceremonies.

The event, sponsored by the University, achieved a total of more than 700 trumpeters playing at one time during the concert. Players from all over the USA and at least four other countries around the world attended. The event was scheduled to have well over 1000 players attend but the September 11th tragedy had a large effect on the turnout. All that did attend enjoyed a wonderful day of entertainment from Doc. The concert opened with a fanfare written especially for the mass trumpet ensemble.

Doc last visited Hattiesburg, MS in 1996 with the USM Symphony orchestra. According to the USM news report “prior to Doc’s long-running gig with the Tonight Show, Severinsen performed in the then-small college town of Hattiesburg in 1969. In his return in 1996, Doc pledged he would return every 30 years!” For our sake, it was great he returned in 2001.