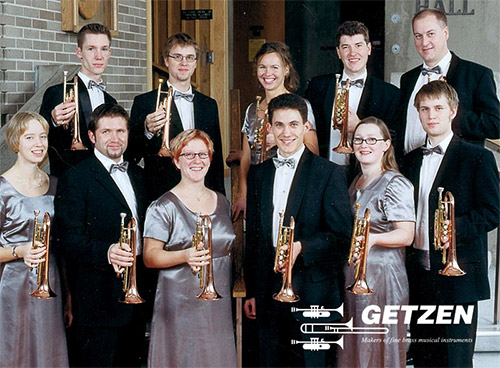 When the Göteborg Brass Band stepped off the bus in Eau Claire, Wisconsin for their Midwest USA Tour, they were attempting something that many groups would not think of trying. They were receiving an entire new set of Getzen Cornets. This in itself is not so daring but deciding to leave their old cornets back in Sweden was. After spending time testing the instrument, principal cornetist Victor Kisnitchenko decided that the Getzen cornet significantly outperformed their current cornets and wanted the band to play them as soon as possible. Göteborg’s Brass Band Director, Bengt Eklund, also believed “the quality of sound in the new Getzen would greatly improve the concept of sound for the entire ensemble.”

The GöteborgBrass Band recently won the 2001 Swedish National Championship. Mostly made up of professional musicians and very highly skilled amateurs, the brass band has been in existence since 1982. Founded by its director Bengt Eklund, the brass band quickly gained an international reputation by participating in orchestral festivals and contests. These successes paved the way for new concert tours, which have encompassed four continents. Göteborg Brass Band has held the position as Swedish Champions for many years (as recently as 2001) but the band’s greatest success came in 1988 when it won the World Brass Band Championship and Entertainment Titles in Australia. 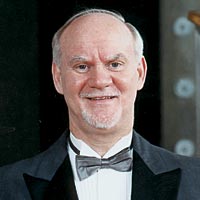 With a wide variety of musical genres (from Mozart’s Magic Flute to Thelonious Monk’s ‘Round Midnight) the brass band dazzles all who listens. Their Midwest tour took them through most of the states of Wisconsin and Minnesota. They were one of the spotlight performances at the Wisconsin Music Educators Convention in Madison where they amazed the audience. There were countless comments about their performance during the remainder of the conference. Most felt it was the highlight of the conference. Getzen is proud to be associated with such a world-class organization. In the summer of 2002, the brass band will be receiving a set of Custom Series Trombones which they are awaiting anxiously.

Bengt Eklund, the former trumpeter of the Göteborg Orchestra, and currently Professor at the School of Music and Musicology, Göteborg University and Professor of Trumpet at the Norwegian State Academy of Music in Oslo. He held the position of President of the European International Trumpet Guild from 1994-2000. His inspiration has to lead the brass band to four CDs – World Champions, The Magic Flute, Versatile Reality, and Ambassadors of Brass.