Last March I traveled to Frankfurt, Germany to visit with distributors and dealers at the annual Music Messe. While there I had my night of fun with an old friend, who happens to be a trombone player (yeah, we run in packs). At some point in the evening, he mentioned that he had a friend who was not happy with his current equipment. He knew if there was anyone that could make this player happy it was…. me. Flattery sank in and I was immediately intrigued. As we talked about how to solve all of life’s problems, the conversation continued to circle back around to this friend and what he needed. During this conversation the performer’s name was never mentioned, it was like classified information that would be unlocked when the time was right.

Fast-forward a month when I received a call from one Mr. Ian Bousfield. The mystery man was finally revealed. I knew Ian professionally as one of the world’s top trombone players and personally from a trip to the UK 15 years ago when I had scheduled a lesson with him. I still remember his Eb arpeggio and him helping me through the issues I was struggling with at the time. After talking a bit about everything from brewing beer, cycling, and trombones, Ian mentioned that he was not only in the States but that he was only three hours away from Elkhorn and that he wanted to work with me. Not some distant time in the future, but in a couple of days. It was off to the races for me to get something together that could satisfy one of the most incredibly gifted and equipment-sensitive individuals I had ever met. It was a monumental challenge I just couldn’t say no to. 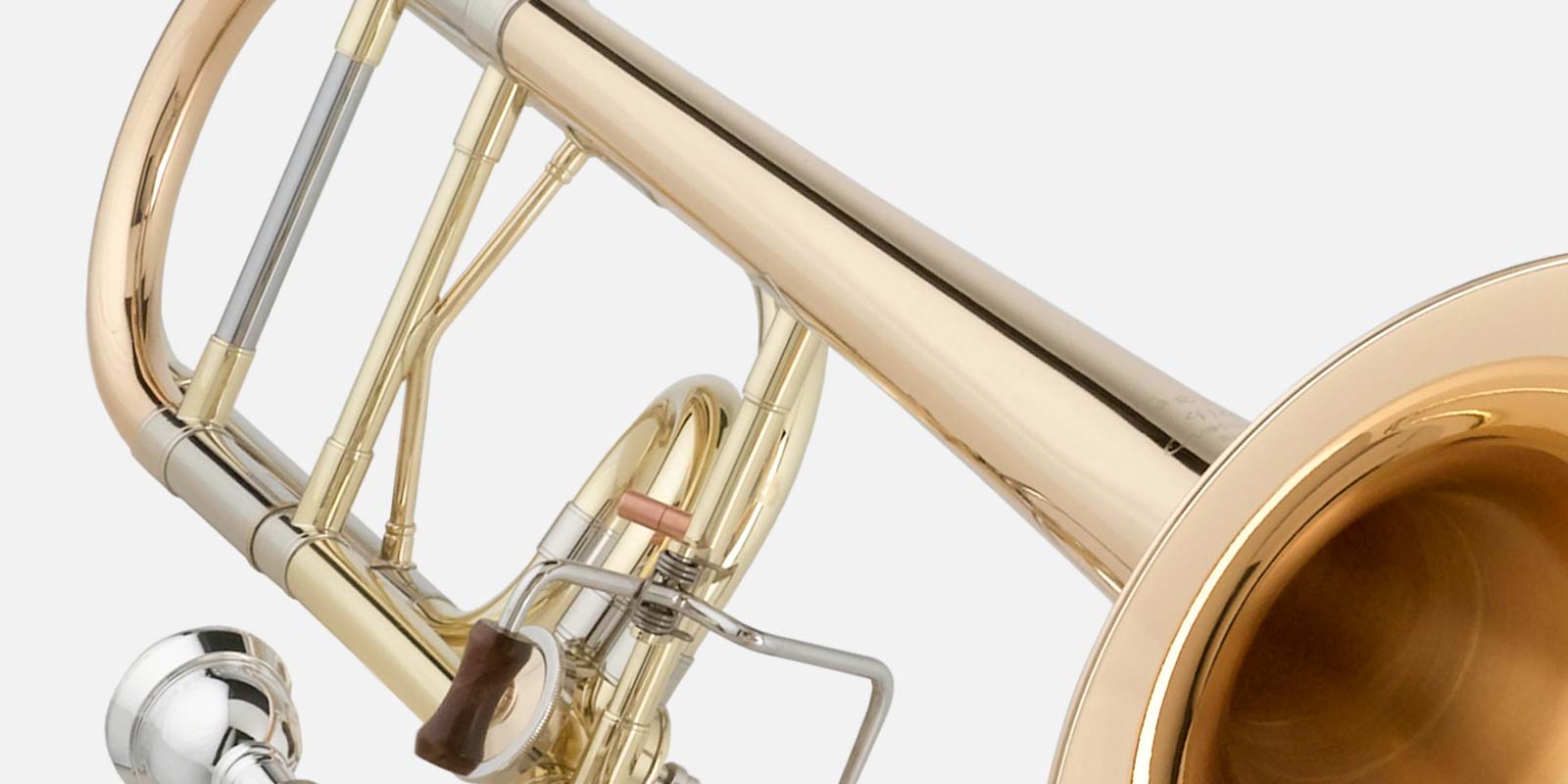 With an understanding of Ian’s playing preferences, I first started with the basic body of the 4047DS trombone and added a narrow slide to it. This setup played okay, but it had some issues. Taking a narrow slide and just throwing it on a wide slide bell section caused the intonation to go sky high. Once we identified this issue, I immediately knew we had to add length not only to the slide, but to the bell section as well. Messing with tapers scares me to no end because it’s the balance within the tapers that makes or breaks a concept. It can turn a wonderful trombone into an out-of-tune mess if you’re not careful. The slide became longer first and from there I focused not only on the tapers of the neckpipe and tuning slide, but also on the treatments and construction of the bell. Ian tried some higher copper content bells and decided that was the direction of “color” within the sound that was needed for his demanding work. Once the bell choice was made, we needed a bit more “width” in the sound. Through what seemed like divine intervention, I realized that the outer handslide cross brace was the place to go. By changing the material, location, and removing excess weight we had exactly what we needed to move forward.

After working with Ian and watching many of his performances on Youtube, I knew that this trombone needed to be as nimble as a ballet dancer, yet as powerful as a bulldozer, and all while remaining sensitive to the player. Giving him the feedback needed to know that what is going into the instrument while on stage, is what’s coming out equally in the hall. This is very hard to explain to listeners and the focus on near feel versus hall feedback is one area that I do concentrate on. When this subject is talked about it always ends up with people shaking their heads at me like I’m the crazy one, but to a player it is known immediately from the moment the instrument resonates against their lips, through their bodies, and out into the hall.

The comfort a trombonist feels by playing this style of instrument is also understood as “relaxed”, “more musical” with “less tension” in the sound compared to other styles of trombones made for the masses. Every day of my job I focus on the individual performer and this attention to personal details has helped me better understand what players want and need. This is what first lead me to develop the patented Edwards Harmonic Pillar system which allows a trombone to be acoustically tuned. I quickly realized that a singular version of that system was exactly what was needed to take this new trombone from great to a world class. It was the perfect design aspect to create a more intimate relationship between the instrument and the musician. Setting the trombone apart from any other on the market and at the same time broadening it’s appeal to all trombonists. It was the final piece of the puzzle.

When I designed the 4047DS trombone, time was not an issue. I had years to trial and error every design concept that came to mind. It became as much an education into what does not work in trombone design as what does. The process with this new trombone was the exact opposite. Instead, it was a relatively short time frame filled with very intense and focused work. Ian knew exactly what he wanted and, thanks to my experience with the 4047DS, I knew how to get there. Miraculously, there were very few bumps in the road and somehow everything seemed to fall into place.

It is my sincerest hope that this new trombone, the 4147IB Custom Reserve, will not only bring Ian Bousfield and his demanding playing schedule closer to his musical ideas, but that it will do the same for you and your career goals, performances, and beyond.