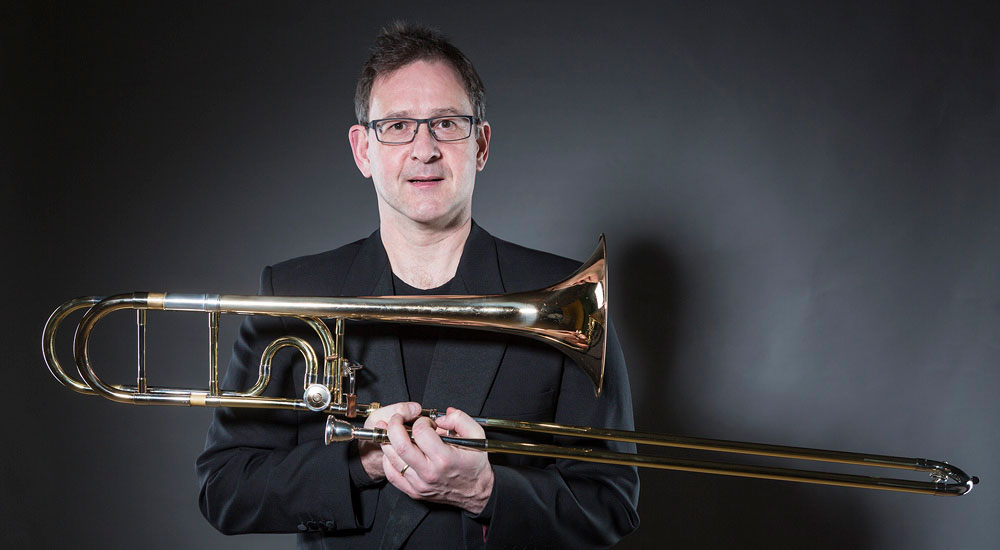 Ian Bousfield has been at the top of his profession for more than a quarter of a century, excelling in more facets of the music business than perhaps any other trombonist of his generation. His stellar career has included playing in two of the top-four orchestras in the world, one of which is recognized as perhaps the greatest opera orchestra anywhere. In addition, Ian has performed as a soloist with orchestras, brass bands, and on period instruments. His extensive resume also includes recording on top labels, playing the theme tracks for blockbuster Hollywood films, and teaching at the Royal Academy in London, England. It is easy to see why the name Ian Bousfield has become synonymous with the trombone.

Born in York, in 1964, Ian is a product of the famous brass band tradition in the north of England. His trombone career began at the ripe old age of seven with his earliest teaching coming from his father and later from Dudley Bright. In a strange twist, Mr. Bright would later replace Ian when he left the London Symphony Orchestra in 2000. The longest spell that Ian enjoyed in the brass band movement was with the Yorkshire Imperial Band between the ages of 14 and 18. During that short four year time with the band, he was fortunate to win the National Championships in 1978, the British Open in 1981, and the Yorkshire Championships on two separate occasions in 1980 and 1981.

In 1979, at the age of fifteen, Ian won the Shell London Symphony Orchestra scholarship. At that point, his carrier began to move undeniably in the direction of orchestras. He joined the European Youth Orchestra at age sixteen under Claudio Abbado and made a brief stop at the Guildhall School of Music and Drama in London before becoming Principal Trombone of the Halle Orchestra in 1983. During his time in Manchester, Ian was lucky enough to perform the United Kingdom premiere of Eine Kleine Posaunenmusik by Gunter Schuller, under the conduction of the composer himself. In 1988, after five years with the Halle, Ian replaced one of his life-long mentors, Denis Wick, as the Principal Trombone of the London Symphony Orchestra at only 24 years of age. There he enjoyed a twelve year career. While with the LSO, Ian was featured as a soloist with the orchestra on several occasions, and recorded the soundtracks to many films, including Star Wars: Episode 1 and Braveheart. In 2000, following a successful audition in Vienna, Ian achieved the honor of becoming the Principal Trombone of the Vienna Philharmonic/Vienna State Opera. Ian was the first, and to date only, British member in the orchestra’s storied, 150 plus year history. This appointment was followed by his membership in the Vienna Hofkapelle Orchestra.

As a soloist, Ian has performed with the Vienna Philharmonic, London Symphony, London Philharmonic, BBC Philharmonic, Halle Orchestra, Sapporo Symphony, and Austin Symphony to name a few. He has worked with countless conductors including Riccardo Muti, Michael Tilson Thomas, Sir Neville Marriner, Kent Nagano, Ion Marin, and Matthias Bamert. Over the years, Ian has also made several solo recordings for labels such as EMI, Camerata, Chandos, and Doyen. Perhaps the greatest highlights of Ian’s solo career to date have been performing the Nina Rota Concerto with the Vienna Philharmonic and Riccardo Muti three times in Vienna, as well as at The Lucerne Festival and in Tokyo, Japan. Another highlight for Ian was performing the world premiere of Jonathan Dove’s Stargazer, written for and dedicated to Ian, with the London Symphony Orchestra under Michael Tilson Thomas in 2007. He has performed with all of the world’s major brass bands, recording with many of them. Ian has appeared as a soloist and as a clinician pretty much everywhere in the world. In fact, it’s probably easier to mention the conservatories and festivals at which he has not appeared than to list all of those he has!Ian is currently Professor of Trombone at the Hochschule der Künste in Bern, Switzerland, a position he has held since September 2011. Having had a relationship with the Royal Academy of Music in London since 1992, where he has been awarded an Honorary Membership, he will be returning as a member of staff as of September 2012.

Ian is also currently an International Fellow of Brass at the Royal Conservatoire of Scotland. His list of former students includes some of the most successful players in orchestras around the world and that list continues to grow.